Me and my friend Christoffer has looking into some Internet Of Things stuff and one of the biggest problems with get “things” on to the internet is that its cost many and battery.

Now we find a way to do it sheep and battery low using, with the community driving “The Things Network”.

Together a community of people all around the globe building gateways and letting people connect to there gateways to send small amount of data to the the network.

All data is encrypted so the gateway owner only seeing package of data delivered but not what it sent.

I was the first person in Nyköping to put up a gateway for this “The Things Network” using a Pycom LoPy unit that talks LoraWan, Wifi and Bluetooth.

The Things Network using LoraWan to talks to units, in Europe with a frquency of 868 MHz and the gateway also connects to the wifi to get conenct to internet and the network.

Then i have a another Pycom Lopy i setup as a node and have going around the apartment and scanning of how long the conneciton works. Really good i most say, here is a signal map: 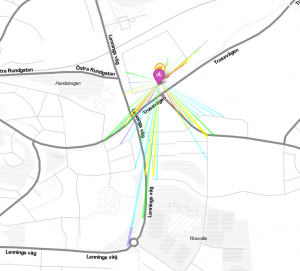 The next step in ths project is to make the node sendning out events from a magnetic sensor that i like to add on my door to know when the door opens and closes and maybe another sensor on the mail inbox.

On tip, after follow the “Get started” tutorials and the node don´t like to join the network but the node is conencted tot he gateway and only sending  activating requests.

Then open up the port 1700 with both TCP and UDP to the gateway ip-number.